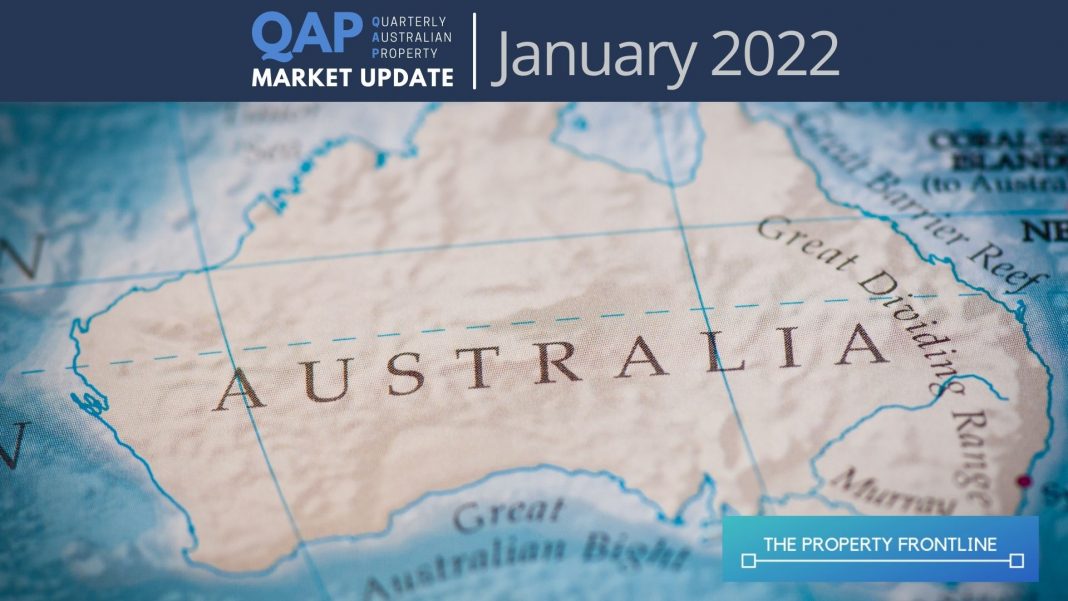 Welcome to the January 2022 property market update.  Outlined below is a compilation of data sets which provide insight into how the market has performed to date, and also indicators for where the market is heading.

Australia’s housing market is experiencing elevated demand, resulting in high volumes of sales at rapid speeds. However, there are also signs that some of the heat is coming out of the market, with falls in enquiries and a decline in views per listing as measured by realestate.com.au.

The market still has a high number of active buyers but, for the first time since the pandemic began, the strong ramp-up in new listings has given them more choice. Buyers continue to outweigh sellers in the current market but the gap is narrowing, meaning the strength of the sellers’ market is softening.

As long as lockdowns remain a thing of the past – even including the self-imposed lockdowns due to Omicron – slightly increased supply should mean buyers will have a better chance at the market.  As usual, remember many suburbs will continue to be overheated.

Overall, we appear to be witnessing the first signs of a shift from an extreme sellers’ market to one which is slowly moving towards more balanced conditions between buyers and sellers.

While rental demand took a hit in Sydney and Melbourne due to many people migrating away from these cities and international borders stemming the flow of new arrivals, the smaller capital cities and regional areas of the country saw heightened demand, reducing supply and pushing rental rates higher.

Median weekly advertised rental rates increased by 4.7% over the three months to December 2021 to be 9.7% higher year-on-year.  This quarterly increase in rents is the largest of any period over the past five years.

Combined regional market rents rose 5% over the quarter and have risen by 10.5% over the past year.

There is also a sizeable divergence between house and unit rental prices, with house rents 2.2% higher over the quarter and 7% higher year-on-year, while unit rents rose 1.2% over the quarter but remain unchanged over the past year.

Overall new listings on realestate.com.au declined 48.9% month-on-month in December, which is consistent with the slowdown we usually see at this time of year. Despite the decline, new listings were higher than at the same time in 2020, up 11.3% year-on-year.

New listings within capital cities declined 60.8% month-on-month in December but they were 10.4% higher year-on-year.

All capital cities saw large declines that are consistent with the typical end-of-year break in these markets.

Included below is information tracked by the RBA and used for the monthly meetings where interest rates / cash rates are decided.

The House Prices graph below demonstrates the steep jump in prices during 2021.  It also demonstrates the restraint the RBA and APRA have had in withholding any overt market interference.  The RBA has let the prices run past the two previous points where action was taken to cool the market – in 2010 and 2017.

APRA held off until October 2021 when lending restrictions were introduced and this can be seen in the Housing Loan Commitments graph showing the ‘investor’ lending trend starting to flatten.

We expect to see minimal changes over the coming months, particularly with the Federal Election expected in May.  This is further evidenced by the RBA who have consistently said they want to see wages on the increase before they will adjust interest rates which is forecasted to be in 2023-2024.

Outlined below are the latest pricing activity figures collated by SQM Research.

Questions or comments?  Don’t be shy . . send your requests through to me at debra@propertyfrontline.com.au.